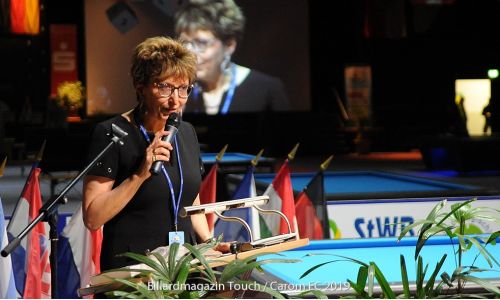 A marathon of matches completed, the European Championships of 2019 were closed on Sunday afternoon. The Stahlpalast in Brandenburg an der Havel was host to the game of billiards for eleven days, with more than 500 athletes from 21 countries competing. The sport itself was a big winner, said CEB president Diane Wild in an interview with Kozoom’s Frits Bakker. She referred to the junior and ladies’ events, the wheelchair demonstration and the regular disciplines that have always been a part of “Brandenburg”. “We have so much potential, and it was on display here.”

The medal chart shows that the Netherlands were the most successful country of these championships, and they were on the podium of the first event. In the artistic discipline, it was Erik Vijverberg who won the gold, beating his practice partner Rene Dericks in the final.

Raymund Swertz was one the favorites to win the 71/2, but he had a surprising opponent in Sven Daske. The German had to concede the win to the Dutchman, and it was remarkable to see how the host country won so many silver and bronze medals (11 in total) without being able to grasp a gold.

Greece’s only medal did have the best color, when young Dimi Selevantas won the 3-cushion event for under 17’s. His country does have a tradition there, with his famous examples Filipos Kasidokostas and Nikos Polychronopoulos both winning a slew of junior titles in their day. Denizcan Akkoca won the U17 silver.

Magali Declunder did what she was expected to do: win the Free Game event for ladies. She has been in a class of her own for a long time, and underlined that with matches of 120 points in a single inning. Jelle Billiet won the Free Game event U17 for Belgium, Pierre Martory was the best in the U21.

The 5-pins are getting more popular in countries across Europe, but it will be a while before the competition has caught up with the Italian specialists. Riccardo Mattino was the best in the U21 category, Andrea Quarta won the individual and Italy triumphed in both the National teams and the Biathlon.

The final of the 1-cushion was long and poor in average, but still fascinating. Dave Christiani and Eddy Leppens tortured each other with horrible positions, until the Dutchman crossed the line after 21 innings. Title favorite Jean Paul de Bruijn was eliminated early, Frédéric Caudron elected not to play this event.

On the small table, known specialists like Belgium’s Steven van Acker and Ivo Gazdos from the Czech Republic got far, but one player stood well above the field: Turkey’s Omer Karakurt. He made quite an impression with his easy, natural play and his averages, needing only 9 innings for 40 points in the final.  The team event was won by De Goeie Queue, with Jerry Hermans and Frédéric Caudron doing just enough to beat Turkish Hemsinspor on points made.

Therese Klompenhouwer lost one qualification match in Brandenburg, but in the knock-out stage she was never threatened. She beat Güzin Karakasli in the final to win her seventh European title. A general average of 1.086 underlined the fact that she is still head and shoulders the best female player in Europe.

Belgium brought their best tag-team in the National event: Merckx and Caudron played an almost error-free final to defeat the Spanish couple, Sánchez / Legazpi. The Belgians used only 12 innings in that final. Spain had used only 11 innings for 40 points against Germany, which shows the tremendous quality of play that is now reached in the Scotch Double.

Finally, the most important title on the agenda: the 3-cushion individual. Favorites were eliminated right and left, and a special mention should go to Dutchman Glenn Hofman who managed to get past Caudron and Sánchez in a single day! Hofman later lost to Legazpi. The two top names that kept on winning were world nr. 1 Dick Jaspers and title defender Marco Zanetti. The two would meet in the final, and it was another memorable match. Jaspers dominated initially, but Zanetti ran 16 to get level. From 30-30, it was Jaspers who regained the initiative with runs of 8 and 2. The Dutchman added a fifth European title to his resume, and the Italian said: “I lost to the best player in the world”. 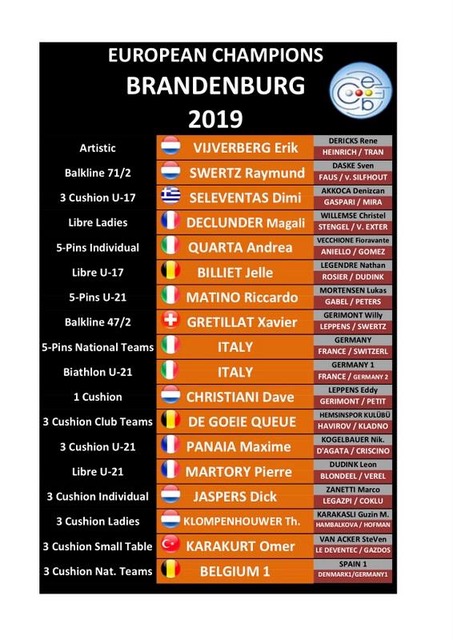 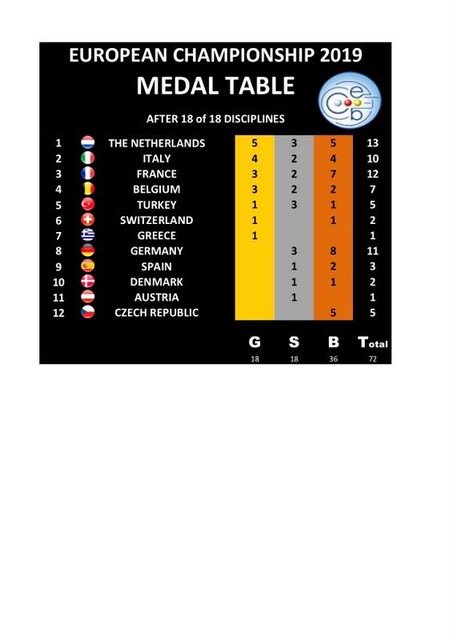