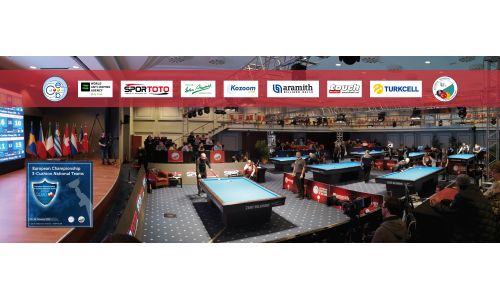 Today the participants of tomorrow's semifinals were determined at the European 3-Cushion National Team Championships in Antalya. Before that, decisive group matches were scheduled, which provided a few surprises.

For example defending champion Belgium 1 dropped out of the tournament due to another draw against the second team of the Netherlands. Eddy Merckx could win his match, but Roland Forthomme lost against Jean van Erp. The first team of the Netherlands also lost. Curiously, they lost 1:3 to the second Belgian duo, Peter Ceulemans and Frédéric Mottet, who therefore reached the quarterfinals. The early elimination of the Germans was also not to be expected. Cengiz Karaca lost, but Dustin Jäschke looked like the winner against Lars Dunch for a long time. With a 29:24 lead, the Dane scored the needed six points to push Germany out of the tournament. Last but not least, Arnim Kahofer and Andras Efler from Austria are no longer in the tournament. The former vice-worldchampions lost 0:4 to Greece and were eliminated.

In the afternoon the quarterfinals were on the agenda. Three of them ended with a clear finish. In a purely Danish duel, the first team (Nelin and Sorensen) prevailed as expected, while France reached the semifinals against the Greeks with two wins by Jeremy Bury and Gwendal Marechal. Spain also joined the winners with Daniel Sanchez and Ruben Legazpi having no major issues with the second Dutch team.
On the other hand the match between hosts Turkey and Belgium 2 was very exciting. Murat Naci Coklu providing the first win, but his colleague Semih Sayginer was beaten by Peter Ceulemans. Thus, the decisive scotch double extension was played for the first time, in which Coklu/Sayginer played much more harmoniously. For example they managed a run of 5 points and in the end they had a clear 15:7-victory.

This afternoon, the seeded teams started the race at the European 3-Cushion Championships for national teams. The first Dutch duo with Jeffrey Jorissen and Raimond Burgman showed a constant performance, which resulted in a clear success against the Croats.

The Italians have already been eliminated, but Marco Zanetti in particular said goodbye to the tournament with a bang. He was hopelessly down against Semih Sayginer with 12:30 after fourteen innings, but he levelled the match with a sensational run of 18 points! Unfortunately that didn’t help in the final score as his team partner Alessio D'Agata lost to Murat Naci Coklu and the duo only managed a draw against Spain 2 in the morning.

Meanwhile, Spain 1 started the European Championship with a win. While Ruben Legazpi won his match against Switzerland safely, Daniel Sanchez only managed to beat Cetin Behzat after he was down most of the time in that game.

The first match of the Austrians also ended in a draw. Andreas Efler won his game against Sweden 2, who had previously lost to Greece 1, but Arnim Kahofer lost at the same time. Thus, the decision will be made in tomorrow's match against the strong Greeks, whereby the Austrians have to win in order to reach the quarterfinals.

The German duo also joined the series of draws. Dustin Jäschke won his match against the Czech Republic, but his teammate Cengiz Karaca lost by a paper-thin margin to Martin Bohac. The Czech scored six points in a row at 24:24, while Karaca scored only five points in his last inning. He missed the sixth point by millimetres.

Denmark and Sweden, who played in a group of two and therefore had to play against each other twice today, also had a highly dramatic time. In both matches, World Champion Torbjörn Blomdahl won against Dion Nelin, while his fellow countryman Michael Nilsson lost to the Dane Jacop Sorensen. Thus, the overall average of both teams had to be used, which finally decided in favour of the Danes with 1.317: 1.256.

Last but not least the French team started with a victory into the European Championship. Jeremy Bury was able to win against Greece 2, while the young Gwendal Marechal at least managed a point split. So in the last group match France is satisfied with a draw against Portugal, who drew against Greece 2 earlier today.

The whole event will be livestreamed via www.kozoom.com and Germanys Touch Magazine will be responsible for newsletters and pictures.