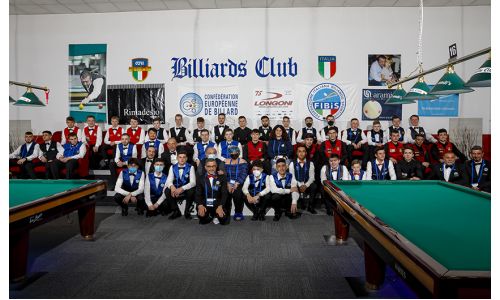 SATURDAY 9TH:
In the EC Biathlon U21 semifinals Italy 2 and Denmark 1 teams prevailed respectively on France and Netherlands.
In the final match team Denmark 1 (Mortensen/Soendergaard) had the better on the Italians defending champions Di Gabriele/Cucchiara for  200/152. Denmark got the first gold medal of this Euro Youth edition.

Euro Youth 2022 in Desio (Italy) reaches the first turning point this evening with the definition of the first young players qualified to the KO rounds that will start from tomorrow, Saturday 9th.

Second competition to finish the group stage and to advance to quarter finals is the EC 3C U17.
Burak Hashas from Turkey won group B ahead of Toni Garcia (Spain) and is the leader after the qualification rounds with a general average of 1,923 and a best run of 11.
In group C Tangui Duriez (France) was first (1,229) and Marcos Morales from Spain finished second (1,263).
Seymen Ozbas (Turkey) was the winner in group A (1,388), Daniel Arturo Zotoz was second.
Iakob Ide (DE) and Luca Philipoom are qualified as best third.

Third EC to advance in the semifinal stage is the Biathlon U21 for National Teams.
Denmark 1 team (Mortensen/Soendergaard) won the groups B, followed by Italy 2 (Di Gabriele/Cucchiara) in second position. Both are qualified to the semi-finals.
In the group A France (Duriez/Herrebrecht) prevailed, and Netherlands 1 (Van't Zelfden/Kroonen) was second.
Semifinals:
France - Italy 2
Denmark 1 - Netherlands 1

In the U21 5-Pin discipline last group round is scheduled for tomorrow at 11.15. Italians Emanuel Cucchiara and Felice Izzo are leading their respective groups so far, one round to be played yet. De Girolamo Del Mauro Luigi Aniello already winner of his group and the other two will play for the second place.