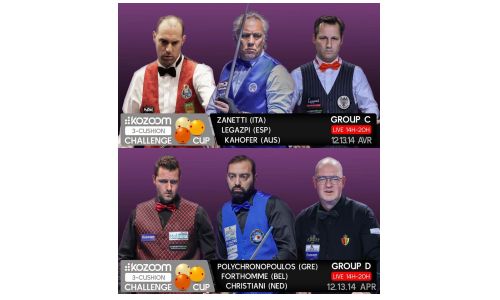 Two more groups of the Kozoom 3C Challenge Cup are on stage:  group C and D will play from 12th to 14th April.

Games started today with first session of both groups. Six sets were played for each group.

In group D Polychronopoulos is leading with 3 sets won, closely followed by Forthomme with 2 and Christiani with 1.

Tomorrow six more sets for each group will be played.

In group C Legazpi shorten the gaps winning 4 out of the 6 daily sets. Zanetti won 2. None for Kahofer. Zanetti still leading with 6 sets, Legazpi 5, Kahofer 1. Six decisive and exciting sets to be played tomorrow for the victory of this group..

In group D Forthomme takes the lead with 5, Polychronopoulos 4, Christiani 3. The situation is completely open and the heat will be on tomorrow in this group too.

Group C: Zanetti did not leave space for a come back of Legazpi and won 4 more sets today for the victory of his group. Final score: Zanetti 10 - Legazpi 7 - Kahofer 1

Group D: Forthome won 3 sets today and this was enough to secure the victory of his group. Final score: Forthomme 8 - Polychronopoulos and Christiani 5.

Zanetti and Forthomme are qualified to the final stage. They join Jaspers and Nilsson who already were qualified as winners of previous groups.