VIERSEN, THE BALLS ARE ROLLING AGAIN 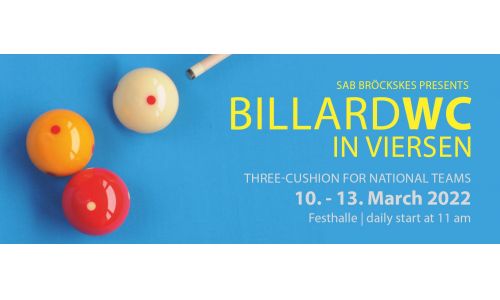 The quarterfinals of the 3-Cushion World Team Championships in Viersen/Germany were played today.

The duo of the host nation Germany had to play against the strong team from Vietnam. Martin Horn started like fire in his singles match and went into the short break with a 21:3 after only six inning. Ronny Lindemann also showed once more that he meanwhile has matured to an international class player. Against Duc Anh Chien Nguyen, he built up a lead in the first innings and carried it through the whole set. Pushed by the crowd, the German duo played almost perfect and finished their matches after 17 (Horn) and 26 innings (Lindemann).

At the same time, the fans on site and on the livestream saw a real sensation as the Colombians actually eliminated the co-favorites from South Korea. Haeng Jik Kim scored the first points for his team, but Pedro Gonzalez tied the match with a razor-thin 40:39 against Chang Hoon Seo. Thus, the scotch double had to bring the decision and in this the Colombians prevailed with 15:7.

The evening session then saw two clear 4-0 victories. In a rematch of a group match, the Turks swept the Danish duo off the board. Tayfun Tasdemir and Can Capak won against Dion Nelin and Jakob Sörensen and are well on the way to a possible rewin of their title three years ago. Daniel Sanchez and Ruben Legazpi showed in their duels against Japan that the Spaniards also want to have a say in the race for the gold medal.

In the semifinals on Sunday, Germany will face Colombia and afterwards Turkey and Spain will meet. It starts at 10:00 with the match of host Germany. The final is scheduled for 16:00.

Before the quarterfinals, the last matches of both groups A and B were played today. In Group B, Turkey beat Egypt 4-0, so the Danes only needed a draw against the Czech Republic to reach the last eight. In Group A, South Korea beat Greece and Japan also had little trouble with Jordan.

At the 3-Cushion Team World Championship in Viersen/Germany, the numerous spectators on site and in the livestream witnessed a dramatic match between Germany and Belgium today, at the end of which Martin Horn became the matchwinner.

For a long time it looked like a draw between the two teams, before the German world class player turned a 20:36 deficit into a victory. However, he managed to do this not in several innings, but in a single one. Horn strung together a total of twenty points and thus provided one of the greatest comebacks in the sport of 3-cushion. At the same time, Ronny Lindemann had no major problems with Peter Ceulemans due to his clean play and provided the second point. So Germany is among the last eight, just like Spain, who got the upper hand against Peru in the last group match.

In Group C, Colombia and Vietnam have qualified for the quarter-finals. The Netherlands, who were among the favourites for the title, were surprisingly eliminated.

The last matches in Group A on Saturday promise to be exciting. Today, the teams from Korea and Japan as well as Greece and Jordan met in the second round. Chang Hoon Seo put his team in front against Japan, but Ryuuji Umeda struck back for the Japanese and equalized. Only in the overall average were the Koreans better and therefore lead the table. Greece, on the other hand, beat Jordan 4-0 to record its first win. Tomorrow’s direct duel between Korea and Greece will now be about reaching the quarterfinals. Japan has the supposedly easiest opponent in Jordan and should be able to book its ticket for the last eight.

In Group B, yesterday's winners Turkey and Denmark played each other. As was to be expected, an exciting match developed in which the overall average ultimately had to decide. Tayfun Tasdemir beat Dion Nelin 40:25 in 21 innings, while Jakob Sörensen won for the Danes against Can Capak 40:34 in 24 innings. Thus, Turkey had the better result in the overall average and now has the best position for reaching the quarterfinals. In the match between Egypt and the Czech Republic, the North-Africans finally prevailed 4-0. Sameh Sidhom won clearly against Martin Bohac, while his compatriot Reyad Nady only pulled away with the last point to win 40-39 against Ivo Gazdos. Thus Egypt remains in the race for the quarterfinals, but has to win against defending champion Turkey on Saturday.

Today, Thursday morning, the 34th  3-Cushion World Team-Championships were ceremonially opened in Viersen/Germany. Thus the traditional event returns after three years of Corona-break to the Festhalle, where it had already taken place since 1990.
After the participating teams were invited into the arena by the master of ceremonies, Frank Schiffers, the playing area shone in the colors of the Ukrainian flag.
Afterwards, the mayor of Viersen, Sabine Anemüller, and the president of the German Billiards Union (DBU), Helmut Biermann, welcomed the athletes, officials and spectators on site and via livestream. Finally, it was Farouk Barki, President of the World Federation UMB, who officially opened the World Championship.

The total of 16 teams will play in four groups of four in a round robin, whereby the first and second place will move into the quarterfinals.

The competitions kicked off with the games of the host nation Germany against Peru as well as Spain against Belgium. While the German team won 4-0 against the South Americans, the match between Spain and Belgium was completely even. Eddy Merckx prevailed on the Belgian side, while Ruben Legazpi scored for Spain.
Due to the better overall average, Spain was in a better position and therefore played against Germany tonight.
This duel ended with a 4:0 for Spain, while in parallel Belgium and Peru shared the points. This means that tomorrow, Friday evening, Germany and Belgium will face each other directly for a place in the quarterfinals.
In Group A the co-favorites from Korea were able to win against Jordan, while Japan was successful against Greece. Thus, South Korea will play against Japan on Friday, while the match between Jordan and Greece is already about staying in the tournament.
Group B saw the first appearance of the defending champions from Turkey. Tayfun Tasdemir and Can Capak also performed as such and had the better end against their opponents from Czech Republic. The second match of this group was very exciting. Jakob Sörensen had put his Danish team in the lead against Egypt, but at the same time Sameh Sidhom had the equalizer on the cue against Dion Nelin. Only in the last innings he lost a safe lead and had to congratulate Nelin for the overall victory of the Danish duo.
Besides that there was a small surprise in group C, because the Netherlands with the world number one Dick Jaspers had to admit defeat to the strong playing Vietnamese. In the second match of this group, France and Colombia faced each other, with the South Americans coming out on top.