CONTINENTAL CUP: A TRIUMPH FOR THE ASIAN EIGHT 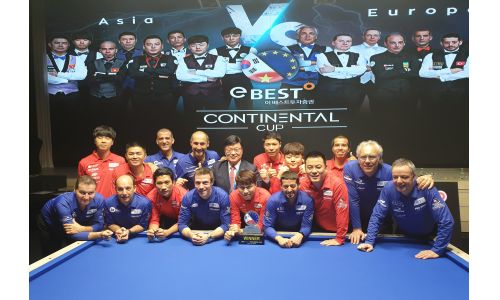 The 2019 Continental Cup, the Ryder Cup of 3-cushion, produced one of the most shocking upsets in  history, when the eight players from Asia defeated their eight European opponents by an enormous margin: 600 – 451. It was an even bigger win than the one recorded last year in France, when the inaugural Continental Cup was won by Europe, 600 – 483.

No European player looked for excuses. “We were simply outplayed in most matches, they were better.” It was true, and in some matches the five Koreans and three Vietnamese were not just better, they were brilliant.

The tone on the opening day was set when Quyet Chien Tran defeated Semih Sayginer thanks to a closing run of 13. It gave Asia the momentum, and they never looked back. A superb Dinh Nai Ngo needed only seven innings for his win, Nguyen Quoc Nguyen made a run of 15, Jung Han Heo couldn’t miss. Everything Asia touched turned into gold, and they took a 200 – 135 lead after one day of play, averaging an astonishing 2.400.

Things slowed down a bit on day two, but Europe could never hit back hard. Only Murat Naci Coklu won some points back for the “old” continent, but those points rapidly disappeared when Myung Woo Cho delivered an almost error-free match in four innings. World number one Dick Jaspers lost to Nguyen, and the day ended with an 108 point deficit: Asia had a 400 – 292 lead.

Day three was almost symbolic. In a change of tactic, Europe made their aces Zanetti and Jaspers play early, but both the Dutchman and the Italian lost. Eddy Merckx, almost invincible during the summer of 2019, lost all three of his matches. Dani Sánchez struggled as well, but he recovered and was the best European on day three.

The three Vietnamese players on the Asian team never lost a match: they came home with nine wins from nine encounters. The best of the bunch was Korean Myung Woo Cho, who went undefeated and averaged 2.777. Sung Won Choi was given the honor of making the 600th and winning point. The Continental Cup ended in a sensational 600 – 451 win for Asia, the hosts averaging over 2.0, the Europeans not even reaching 1.6.

Next year, the Continental Cup will return to European soil. World champion Torbjorn Blomdahl will rejoin the team then, and that may help. This year, he made himself useful to fans worldwide, providing insightful commentary on Kozoom.