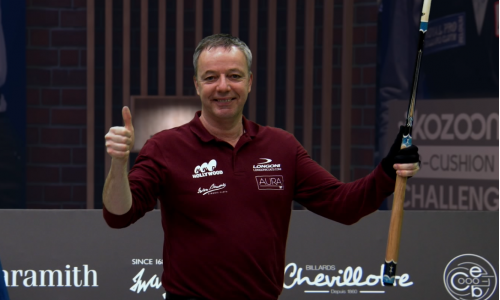 It was a complete Jaspers show in the Group A match of the Kozoom 3-Cushion Challenge Cup that took place on 17, 18 and 19 March 2021.

The outcome of the last day in the Kozoom Challenge was not surprising to anyone. Dick Jaspers became the second player after Rubén Legazpi to qualify for the finals of the tournament in Andernos Les Bains. The Dutchman maintained his position as the comfortable leader on the last of three days in the match with Peter Ceulemans and Rui Manuel Costa.

Jaspers' lead was extended on the last day with five winning sets from eight matches. That brought him to 16 sets won over three days with an average of 1.814 and a high run of 7. The pursuers stayed at a respectable distance: Peter Ceulemans was the runner-up with 5 sets and 1.252 average, Rui Costa won 3 sets in total out of 24, exactly 1.000 average and just like Ceulemans, a high run of 8.

Final standings in Group A: