Balls will roll amidst the pyramids 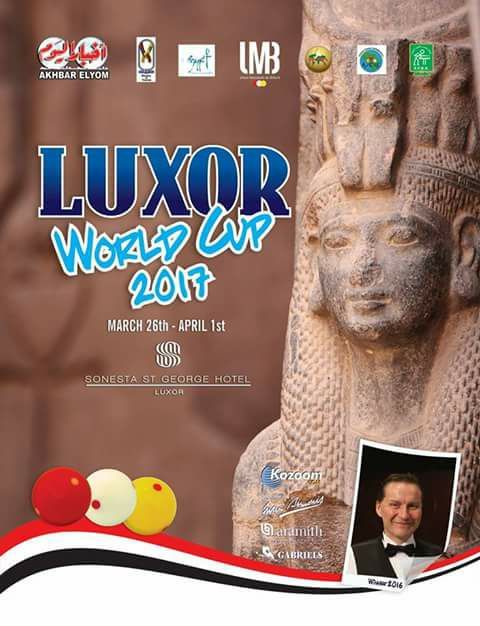 LUXOR - For the fourth year in a row, the world's best 3-cushion players travel to Luxor on the Nile, where the second World Cup of the season will be played. The graceful Sonesta St. George Hotel will again be the host. The first stop on the tour was Bursa, Turkey, where Caudron played a superb final, beating Jaspers in only seven innings. He will already have his eye on the overall World Cup, and a second win would give him a dominant position in the seven-event cycle  The Sonesta's upper room, with its fantastic views over the Nile and the west bank, welcomes a total of 125 participants, from March 26 to April 1. For many players in the preliminary rounds, the Luxor World Cup is not only a billiards challenge, but also a wonderful opportunity to visit the historic monuments. Dick Jaspers, who won the World Cup cycle last year, is the number one ranked player to top the seeded players, followed by Frédéric Caudron, Dani Sánchez, the world champion and Player of the Year in 2016, Torbjörn Blomdahl and Marco Zanetti. The elite group of fourteen seeded players has nine Europeans, four Asians and one African. The fourth World Cup in Luxor is the last in this city. UMB President Farouk Barki: ,,Next year (2018) we have two big organizations in Egypt. The world championship in the first week of October and the World Cup in Hurghada. After four great editions we have to say goodbye to Luxor.'' The World Cups in Egypt (Hurghada and Luxor) are known for their exchanges of referees over the years. Many Germans, Dutch and Belgians have joined the excellent Egyptian corps. Bilo Salama is the head of the referees, Willem Hofman from the Netherlands has been a guest referee for seven years now. What makes the World Cup in Luxor great, and why do you want to be part of the event?
Bilo Salama: ,,Luxor is a special World Cup, because there are so many monuments to visit before and after the matches.''
Willem Hofman: ,,The combination of culture, ancient history, the pleasant weather and sports on a high level makes it special.'' How many times have you been a referee in the Egyptian World Cups?
Willem Hofman: ,,This is the seventh World Cup here in Egypt, the fourth time in Luxor.''
Bilo Salama: ,,I did them all in Luxor, now unfortunately for the last time.'' Were there any special moments?
Bilo Salama: ,,The first victory of the Dutch number one, Dick Jaspers, after fourteen World Cups in Egypt was in Luxor. And the final in which Frédéric Caudron started with 19 two years ago.''
Willem Hofman: ,,The final in which Dick Jaspers played 5.000 average, the year that Bilo Salama, my little big friend, was one of the players and to spend all days there with friends.'' How many matches are you leading through the year?
Willem Hofman: ,,I think between 75 and 100 in my country, in all disciplines. And forty matches more in the year of the European championships in Brandenburg.''
Bilo Salama: ,,I am part of the organization in Hurghada and Luxor, so I have to wait for the final stages. But lots of matches at the Europeans in Brandenburg this year.''
`
Three winners from the low countries in Luxor until now. Who is your favorite for this year? Willem Hofman: ,,As a Dutchman I say Dick Jaspers, he's always been my favourite, furthermore Dani Sánchez, Nikos Polychronopoulos and Roland Forthomme, these are my main contenders.''
Bilo Salama: ,,At this stage of performance from the players, anyone can win.'' The top fourteen in Luxor are: Dick Jaspers, Frédéric Caudron, Dani Sánchez, Torbjörn Blomdahl, Marco Zanetti, Eddy Merckx, Nikos Polychronopoulos, Haeng-Jik Kim, Sameh Sidhom, Jung-Han Heo, Jérémy Bury, Murat Naci Coklu, Jae-Ho Cho and Quyet Chien Tran. The wildcards are given to Erick Tellez (Costa Rica) and the Egyptians Riad Nady and Ihab El Messery. Egyptian's champion Sameh Sidhom, looking forward: ,,My form is very good these days. I expect a very strong World Cup, as all the players are showing top form billiards. For me, it is an honor to be part of such an event. I know, sometimes it adds more pressure to be a home player, but I think I've got used to it now.'' Dick Jaspers is the leader in the ranking with 432 points, ahead of Frédéric Caudron 392. In Luxor, the Dutchman must defend the 80 points of his World Cup win in Bursa last year. The Belgian was second there and defends 54 points. The first heats are on Sunday, March 26, including the Egyptian Mahmoud Ayman, the French World Cup organizer Joel Switala and the world champion artistic billiards Serdar Gumus. The UMB and the Luxor organization invite you to visit the tournament, or to follow the matches live on kozoom.com.