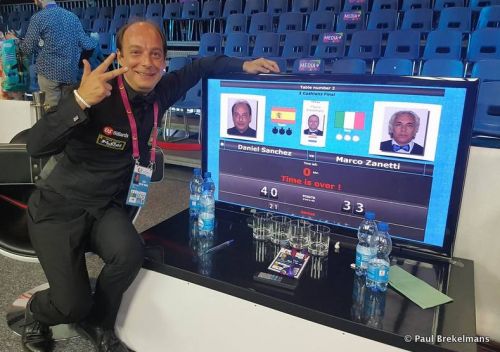 The gold medal at the World Games in Wroclaw, Poland, was for Dani Sánchez, the three cushion player who is unstoppable this year. Marco Zanetti, another European star player, took the silver medal, followed by the young Egyptian dentist Sameh Sidhom. The world title, the number one position in the world, the Super Cup win, Player of the Year election and now the World Games victory are incredible highlights in this season of Dani Sánchez.

The 43-year old Spaniard won in Wroclaw, Poland, the World Games for the third time. In the mega-event for thirty non-Olympic sports, title holder Marco Zanetti from Italy was his victim in the final: 40-33 in 21 innings. Sánchez completed a hattrick at the World Games, having first won in Akita (2001), then in Duisburg (2005), both times after a win in the final over Dutchman Dick Jaspers. Billiards (three cushion) was for the fifth time part of the World Games. Dick Jaspers won in 2009, in Kaohlsung, Taiwan, and Marco Zanetti won in 2013, in Cali, Colombia. Sixteen players from the best billiard countries in the world were invited to compete in the World Games. Sameh Sidhom from Egypt won the bronze, giving him a share of the podium with Sánchez and Zanetti.

In the first rounds, Dani Sánchez didn’t seem to be in trouble at all. He had easily defeated Polish player Tonojan (40-9 in 14), American Hugo Patino (40-32 in 29) and Sameh Sidhom, by 40 points to 16 in 29 innings. The battle for gold, in front of an enthusiastic crowd, was in a different category. Marco Zanetti, third on the world ranking list, dominated the first half of the match and Sánchez looked unable to find any rhythm.

The Italian player built up a comfortable 21-10 lead, helped by a run of seven. Things changed after halftime, and the Spaniard showed his killer instincts. Two small runs of four helped close the gap to 24-20, then a three from Sánchez followed by an eight from Zanetti, but the Spaniard's run of six proved decisive. Zanetti still had the equalizing inning (from 40-33), but he missed the break shot.

Dani Sánchez, with a smiling face, posed in front of the score board after the final with three fingers spread. His third World Games title was mostly about honor and prestige: there was no prize money, nor were ranking points awarded. ,,I play for my country, for the honor and the medal, said Sánchez in the run-up to the final match, the giants fight with Marco Zanetti. In the past, the Spanish/Italian clash often produced spicy, high-quality prestige-filled matches.

Just like four years ago, when he beat Eddy Merckx in the final, Marco Zanetti played a strong World Games tournament. The European champion started with a win over Greek Kostas Kokkoris (40-25 in 20), then got past American Pedro Piedrabuena (40-23 in 18) and won a tough semifinal against Dick Jaspers: 40-36 in 23 innings.

This was the first time a player from the African continent was on the rostrum of the World Games. Sameh Sidhom saved his best match for last, when he beat Jaspers in the decider for 3d/4th place: 40-26 in 23.

The most remarkable match in the tournament was the Dutch/Belgian meeting between Dick Jaspers and Eddy Leppens, with Jaspers thundering away to a 28-1 lead after four innings. Leppens made a good comeback and lost with 2 average: 40-24 in 12, making that the top quality match of the week. Zanetti had his best moments in the home stretch of his match against Jaspers, when he won 40-36, from 33-33.