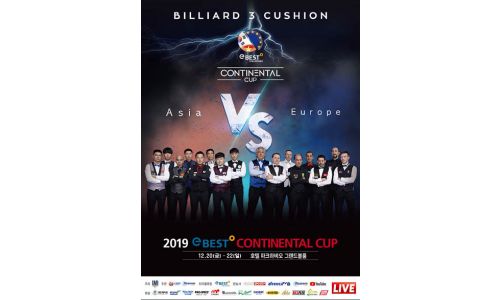 It’s eight against eight, it’s Europe against Asia: the Continental Cup is to 3-cushion what the Ryder Cup is to golf and the Mosconi Cup to pool. Last year, the inaugural edition of this event, held in Eysines, France, was emphatically won by the European team: 600 – 483 in 328 innings (1.829 – 1.472).

Naturally, the event now moves to the other continent. Seoul, South Korea will host the second edition, now named “e-BEST CONTINENTAL CUP”. The world ranking list has been used to determine which players make the team.

Play will start on Friday the 20th of December and end on Sunday the 22nd. It’s a race to 600 points, divided into matches of 25 points. As a novelty, the team in the lead must now announce their player first, and the team that trails gets to respond with their selection of player.

All matches can be viewed on Kozoom.