EC 2019 in Brandenburg an der Havel 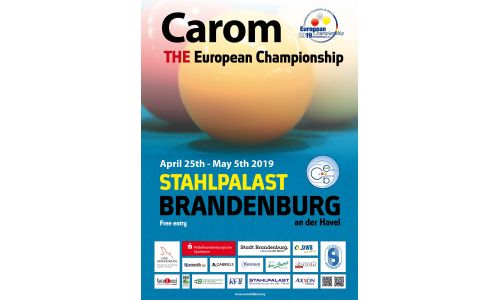 The clock is ticking! The opening shot of this year’s European Billiards Championships is going to be made in two month in Brandenburg an der Havel. This major billiards event unites all popular billiards disciplines in one big Championship hold biennially. More than 500 athletes from 20 nations are going to compete for the European titles. The sports enthusiastic city right outside the borders of Berlin hosted the competition 3 times before in 2013, 2015 and 2017. Since the European governing body for billiards sport CEB made formidable experiences regarding organisation and team work with the local sports officials, the operators of the venue « Stahlpalast » and the representatives of the city Brandenburg and the federal state Brandenburg, it was obvious to host the Championships there once again. "Being indispensable associates, the city of Brandenburg as well as on site coordinator Helga Blawid allow us to organize and host this mammoth event with 18 new Champions being crowned over the course of 11 days. With the Axxon-Hotel, the associated Stahlpalast and the main sponsor « Mittelbrandenburgische Sparkasse » we have even more reliable and interested partners at our side", announces CEB president Diane Wild. The numerous different titles that are fought for consist of all the disciplines brought together such as three cushion, free play, one cushion, balkline, 5 pins and artistique. All competitions are mixed gender, except the two European Championships dedicated to women (free game and 3-Cushion).  Introducing the youth (U17 and U21) into the competition was an important factor for the organizers since "they are the future of our sport and we want them to be as close to their idols as possible", says Wild. Additionally, the disciplines Eurokegel and three cushion for wheelchairs will be played as a demonstration. The whole event lasting from April 25th till May 5th will be free of admisson fee. Local spectators are more than welcome to join the audience. Viewers from home will also be provided with a high-quality live stream from www.kozoom.com which will be broadcasted worldwide. On top of that there will be daily press releases in three languages as well as professional pictures to be found on the EC-Media site. Media page / Media Accreditation Form: https://germantour.net/karambol_em_brandenburg_2019_media_tool.asp?id=144 Mediaseite / Online-Akkreditierungsformular für Pressevertreter: https://germantour.net/karambol_em_brandenburg_2019_media_tool.asp?id=143 Page des médias / Formulaire d’accréditaton: https://germantour.net/karambol_em_brandenburg_2019_media_tool.asp?id=145 Kind regards, EC press office