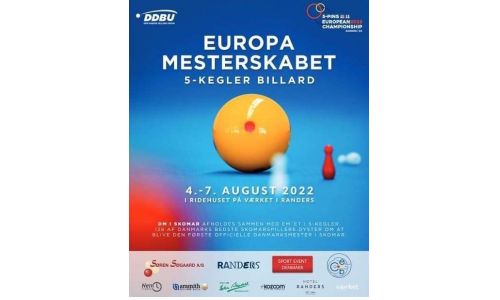 The CEB sport season 2021/2022 is coming to its conclusion by staging the most important and awaited European event for the discipline of 5 pins:
The European Championship 5 Pins Individual.

The venue is set up in the "Ridehuset" at "Værket" in Randers (Denmark), an amazing historical building used for artistic and cultural events and often for very important billiard competitions as happened for the 3 cushion World Cup in 2002 and 2019. The Danish federation (DDBU) is taking care of the organization under the auspices of CEB.
13 CEB National Federations are represented in this championship by 48 athletes showing the growth of this discipline. The 48 players have been drawn into 16 qualification groups of 3 players each. The first two of players of each group will move to the knock-out stage of last 32.
Italians are the favorites for the medals with a very strong line up including the defending champion Andrea Quarta. The competitors will not stand by and simply watch, as the technical level in many countries has considerably increased in recent times and many athletes from other nations have a chance to get to the podium, Denmark, Germany, France just to name a few.
Athletes will take confidence with the billiards on August 3rd. The real competition will start on August 4th at 11:00. Knock-out stage will start on August 5th at 15:30. Semifinals are scheduled on Sunday August 7th at 10:00 and 12:00. The final match will be at 15:00.
All the competition will be live streamed free by Kozoom with english technical comment.
General infos, full player list, qualification groups and results here.
Follow us on Facebook for the latest news and pictures. 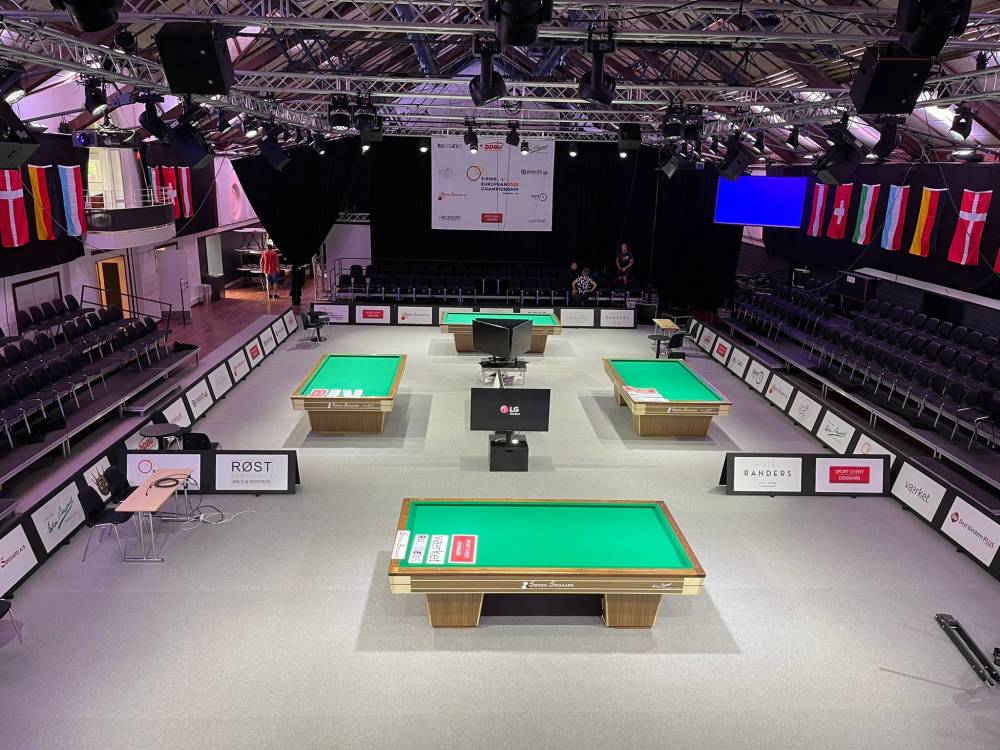 The European Championship 5 pins in Randers started with the 16 groups, very nice matches with free live streaming by Kozoom with english commentary on YouTube also. The location is fantastic and DDBU has set it up perfectly.

Let’s speak about the matches: as expected all the Italians move to the last 32, where also some youngsters were able to win their group as the Dutchman Marius Kroonen and to qualify as runner up as Selhattin Ozkul from Turkey. A nice incentive for the forthcoming new Next Gen Longoni!

Strong results for all the Danish players too that moved to last 32. A special mention to Peter Debaes from Belgium number 1 of the qualification ranking, a second Belgian player won his group and made it to the last 32: Gianluca Memmi.

No surprises into the last 32 yesterday while the last 16 are showing the favourites. Some of the 4 Italians in the lower part of the KO tree will probably clash together into the quarterfinals and further in the semifinals, but first they have to pass over their opponents in the last 16: 3 Danish players and a German one that will not give up easily. In the upper part of the tree there are more winners of the last 32 round: 3 Danish players, 2 Belgian players, 2 French players and 1 player for Germany fighting hard to reach a spot on the podium and therefore some medals.

Big thrill today, 3 matches on Kozoom TV, Peter Debaes and Rene Hendriksen at 12, Paolo Marcolin and Johnni Pedersen, then a possible quarterfinal with a classic for 5 pins entushiasts, Michelangelo Aniello and Andrea Quarta. But the German player and the Danish guys are ready to fight at their best to deny these forecasts!

Stay tuned on Kozoom on web for all the matches and on Kozoom TV for the table one with English commentary too!

We had great games today in Randers for the EC 5 pins Individual! Last 16 and quarter finals were played.

The day started with last 16 rounds: in the upper part of the KO table two Danish, one Frenchman and one from Germany survived the last 16 and will compete in quarter finals: Renè Hendriksen, Toni Rosenberg, Christophe Duvernoy and Kasper Kristoffersen.

The lower part was an all Italian affair: Andrea Quarta, Michelangelo Aniello, Paolo Marcolin and Achille Mignolo they all won their last 16 match and will have to fight each other in the quarter finals.

Later the quarter finals were on stage: in the upper quarter finals Toni Rosenberg defeated Renè Hendriksen by 3-1 and will play the semifinal against Kasper Kristoffersen who prevailed on Christophe Duvernoy by 3 to 1.

In the lower side of the KO table the Italian challenge continued with Michelangelo Aniello who defeated his teammate and title holder Andrea Quarta by 3 to 1 after a very nice game. In the last quarter final Paolo Marcolin had the better of Achille Mignolo scoring 3 to 1.

Therefore the semifinals are decided:
Toni Rosenberg (DE) - Kasper Kristoffersen (DK), tomorrow at 10.
Michelangelo Aniello (IT) - Paolo Marcolin (IT), tomorrow at 12.
The final is scheduled tomorrow Sunday 7th at 15:00.

Don't miss both semifinals and the final. Live on Kozoom TV on Youtube and on Kozoom website, with English commentary by Luca Marzio Garavaglia.

Check out the knock-out tree.