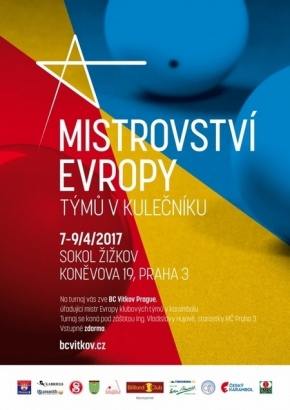 PRAGUE - The Czech team Vitkov Prague with Marek Faus, the Belgian Eddy Leppens and the Dutch player Dick Jaspers is the title holder in the European Cup for classic teams in Prague this weekend. The defending champion has strengthened its team for this tournament with Dick Jaspers, the world's number one in three cushion, and seems stronger than ever before. The Dutchman, who plays one cushion, is replacing the German Wolfgang Zenkner in the team. The European Cup is organized by Vitkov Prague together with the CEB, the European Billiard Federation. The tournament will be broadcast live by Kozoom. From Friday the 7th until Sunday the 9th, the reigning champion Vitkov Prague will face the German team Bochum and four French teams which have qualified: Chartres, Soissons, Ecully and Ronchin. The game types are balk-line 47/2, balk-line 71/2 and one cushion. The German team of Bochum will show up with the seasoned players Ludger Havlik and Thomas Nockemann and the young Dutchman Sam van Etten. The Swiss Xavier Gretillat leads the Chartres team with further Willy Gérimont, who won a national tournament 47/2 in France this weekend, and Jacky Justice. Ronchin has two strong balk-line players in the team, Jean-Francois Florent and Brahim Djoubri. Bernard Villiers is the veteran in one cushion. Vitkov Prague, the favorite to take another title, faces the strong French team Soissons. Olivier Careaux in the feared balk-line player, like the Spaniard Esteve Mata. Alain Remond plays one cushion. The team of Ecully is playing with Le Roy, Venditelli and Zoppi. The notable absentee is the Dutch/Belgian team Etikon, that took the title in the top team competition in the Dutch league last week. Etikon is the five times European cup winner. The players are Patrick Niessen, Jean Paul de Bruijn, Frédéric Caudron, Henri Tilleman and Ferry Jong. The team says farewell to the sponsor at the end of this season, but seems to make a new start in the Belgian billiard room of Patrick Niessen, just across the border with the Netherlands. Vitkov Prague won the title in the last two years. The group format: Group A:
Vitkov Prague
Soissons
Ecully Group B:
Bochum
Chartres
Ronchin. The program: Friday: 16.00: Soissons-Ecully
19.00: Chartres-Ronchin Saturday: 10.00: Vitkov Prague- winner 1st match
12.30: Bochum-winner 1st match 15.00: Vitkov Prague-loser 1st match
17.30: Bochum-loser 1st match Sunday: 9.30: Semi-final A1-B2
12.30: Semi-final B1-A2 Final