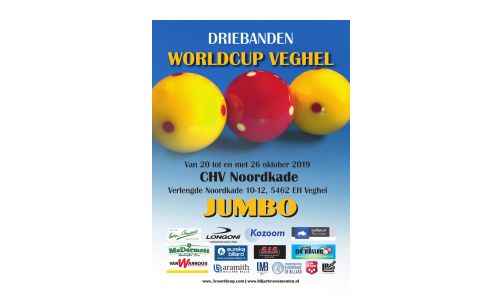 After four World Cups in Antalya, Blankenberge, Ho Chi Minh and Porto, it's the Netherlands turn, The fifth event in the 2019 cycle will take place in Veghel.

The Netherlands hosted a World Cup for the last time in 2009: Sluiskil. A decade later, world number one and world champion Dick Jaspers gets a chance to play in his own country again, even in his own province. The city of Veghel was home to the Dutch Nationals (Masters) for many years.

For the World Cups of 2019, 2020 and 2021 that will take place in Veghel, the Dutch Federation has teamed up with the BEN Foundation (Billiards Events Netherlands), who were previously responsible for successful Masters and team Cup events.

The venue is an unusual one: a large industrial building owned by the main sponsor of the event: The Jumbo supermarket chain. God catering will not be a problem in Veghel.

Play will start on the 20th, the final is scheduled for the afternoon of the 26th. Dutch cable giant Ziggo will broadcast the World Cup matches on Thursday, Friday and Saturday. As usual, first prize will be 16.000 euro and there is still 1.500 euro for those who finish 17th – 32nd. The tables are Eureka Triangle, the cloth is Simonis 300 prestige, and the balls are Super Aramith Pro Cup Prestige.