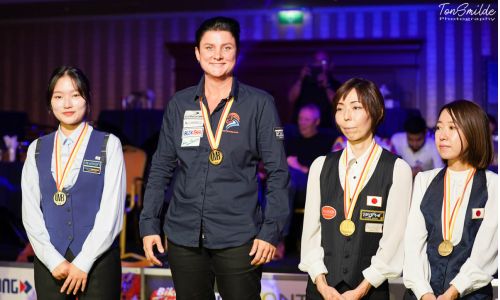 Therese Klompenhouwer wins her fifth World gold this afternoon in Heerhugowaard (The Netherlands) in front of his own fans. She set up a record of world gold medals winnig five times out of 10 editions of this World Championship.
The final ended with a score of 30 to 16 in 22 innings against the young Korean Ji Eun Han that got the silver medal.
The Dutch Queen of 3-cushion dominated the tournament and was never in a real danger of losing a single match.
In the whole tournament Therese scored 170 points in 122 innings (1.393), her highest run of 8 was achieved in the first innings of the final. A step over any other female player in the world.
The podium is completed with two Japanese: Y. Nishimoto and N. Fukao.