LADIES FIRST IN VALENCIA THEN THE JUNIORS 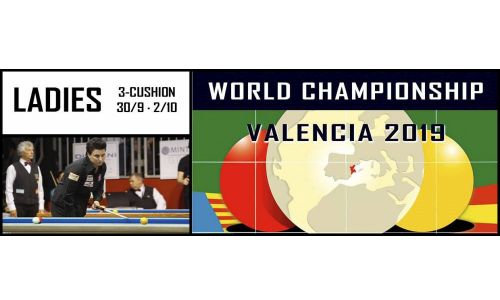 From 30 September – 5 October, Valencia, Spain will be the center of the 3-cushion world. The Ladies will play their world championship first, then the juniors. The Ataneo Mercantil de Valencia is the venue that hosts both championships, and Mr. Eduardo Rifaterra is the tournament director. UMB vice-president Fernando Requena is the organizer, and he has high hopes for the week. “We intend to make it a great event and a major promotion for the sport.”

Title holder in the Ladies event is Therese Klompenhouwer from the Netherlands, a three-time world champion (2014, 2016, 2018). Her traditional rival is Orie Hida from Japan, who has won this title on four occasions (2004, 2006, 2008, 2017). Hyun Ji Yong and Min A Kim from Korea, Gülsen Degener and Guzin Karakasli from Turkey, and Sruong Pheavy from Cambodja are dangerous outsiders.

There are eight groups of three players, and the match length in the group stage is 25 points. Two players per group will qualify for the K.O. stage, where matches will be to 30 points.

In the junior event, Myung Woo Cho from Korea defends his title. Next year, he will no longer be eligible. His countryman Hwa Woo Cho, Christian Montoya from Colombia, Percy Martinez from Nicaragua, Nicolas Kogelbauer from Austria, Alessio d’Agata from Italy and Maxime Panaia from France are a few of his main rivals.  Given Myung Woo Cho’s recent win at the LG U+Cup and his averages in the past year, he must be considered a towering favorite.

The juniors will also play to 25 points in the group stage, but in the final the match length will be 35 points. The full player list:

The Ladies event will start on 30 September, the final will be played on 2 October. The juniors start the next day, 3 October. Their final is scheduled for 5 October. All matches can be viewed live on Kozoom.