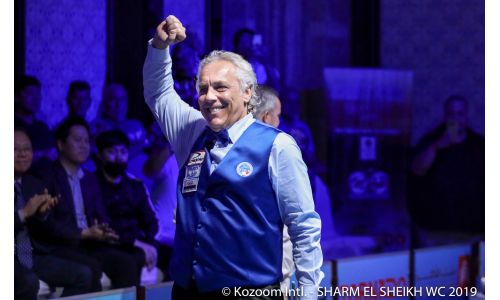 The seventh and last World Cup of the 2019 cycle was a new high point in the long career of Marco Zanetti. His last World Cup victory was in 2014, and he added one this week, five years later. His best tournament ever was the 2013 European championship, where he remained unbeaten and averaged 2.500. He even removed THAT record from his resume, averaging a fantastic 2.718 over seven matches. The Italian managed to beat Jérémy Bury in the semifinal and Dick Jaspers in the final, coming out on top on an all-European closing Saturday.  The unpredictability of modern 3-cushion was once again underlined in Sharm El Sheikh, where the four strongest billiard nations in the world, Belgium, South Korea, Vietnam and Turkey, were all missing from the final four. A quartet of European players made it to the semifinals: Bury, Horn, Jaspers and Zanetti.

High expectations were not quite fulfilled in the first semi, between Horn and Jaspers. Both players showed a lot of mutual respect and defense was present in most innings. Horn could not score as well as he had done against Semih Sayginer, and the experienced Jaspers won by a margin, even though he used up an unusual 24 innings: 40 - 25.

The second semi, between former Agipi teammates Zanetti and Bury, provided more fireworks. The Frenchmen had been left without a chance in Randers last week where they also met, but he kept up this time. Zanetti made a run of 11 to create the gap, and he never let up from there: 40 – 28 in 13 innings. Both Horn and Bury could look back on a strong performance for the week.

The final match did not get the rapid start we sometimes see these days. Both players needed a few innings to find rhythm, but then the level rose quickly. Again, it was Zanetti who scored a high run (10), this time in the 9th inning. It took him to 31 – 19 and Jaspers could not recover. Uncharacteristically for the Dutchman, it was his defense that cost him. Zanetti was presented with many good starting positions, and he made excellent use of them.

Jaspers went home with a great consolation prize: he won the overall World Cup of 2019, made up over the seven events of the year. It was the sixth time Jaspers won that trophy: he did it earlier in 1997, 1999, 2008, 2010 and 2016. Jaspers also had the high run of the tournament in Egypt: 23. He holds on comfortably to the nr. 1 position on the world ranking, ahead of Zanetti, Blomdahl and Merckx.