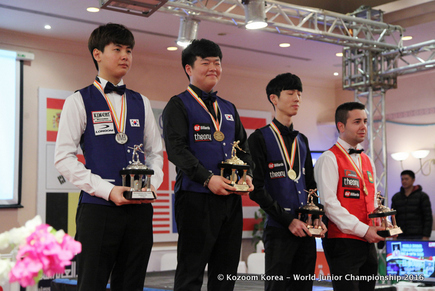 HURGHADA/EL GOUNA - The European players tried hard, but the Koreans were just too strong. A place in the final four for Spain's Andres Carrion, that was the best the old countries could do. The other three spots on the podium were all for Korean players, with eighteen year old Myung Woo Cho on the highest step. He is the new junior world champion. A Korean hegemony in junior 3-cushion looks to be inevitable. The world championship for junior players was won four times by Haeng Jik Kim in recent history, his younger brother Tae Kwan Kim held the trophy last year, and the new champion from the land of infinite talent is a cheerful, 18-year old fellow with enough promise to win the world title one day. The Koreans claim the future of 3-cushion, but the European heavyweights Caudron, Sánchez, Jaspers, Blomdahl, Merckx and Zanetti refuse to give up their place as kings of the hill. They still have a stronghold on the World Cups and the World Championship. Spanish junior coach Jose Maria Quetglas gave his analysis of the global situation with regard to young players, and said that the iron discipline and willingness to practice long hours are the main reason for the Koreans leading role. Myung-Woo Cho, only eighteen, has a beautiful, technical game. He bows in apology after a lucky shot, and taps his cue in appreciation when his opponent makes a difficult point. He is the champion of long practice hours, so he said in an interview after his semifinal match in the Guri World Cup. Eight to ten hours a day he spends, studying positions and learning systems, all in his dad's billiard room. It is a Spartan regime, unthinkable in other parts of the world. Myung-Woo Cho missed out on the gold medal two years ago when Adrien Tachoire won, and did not play to his best ability last year. He was the undisputed favorite this year, and came through with flying colors. He stood proudly at the highest step of the podium, representing his country, and he was overjoyed when the national anthems of Korea and Egypt were played in the arena of the Mövenpick hotel. On the final day, Cho stood strong as he first won his semifinal against Andres Carrion (35-22 in 22 innings), then the final against his last competitor, Jung-Ju Shin, 35-29 in 21 (1.666/1.381). Of the European contenders, Spanish champion Andres Carrion lasted longest. Tom Löwe from Germany made it to the last eight, as did Carlos Anguita. Ahmed Hatem was the only Egyptian player to survive the qualifications. The two players from South America, Christoper Ramirez, Caro Nelson and Christian Sanchez did not qualify from the groups. CEB-president Bennie Deegens had nothing but praise for the El Gouna event. "I congratulate the Egyptian federation with their organizational efforts, the accommodation and the hospitality. This was again a quality event, with high level play by the juniors. We expected the Koreans to come out strong, but Europe, Africa and South America put up a good fight. From day 1, young Mr. Cho showed that he came here to win, and he deserves his title to the full."   Final ranking:
1 Myung-Woo Cho (Korea) 12-1.276-7
2 Jung-Ju Shin (Korea) 10-1.270-7
3 Jiseung Han (Korea) 8-1.051-7
3 Andres Carrion (Spain) 6-0.879-8
5 Tae-Kwan Kim (Korea) 5-0.973-9
6 Tom Löwe (Germany) 4-0.685-6
7 Carlos Anguita (Spain) 3-0.900-5
8 Ahmed Hatem (Egypt) 2-0.658-3