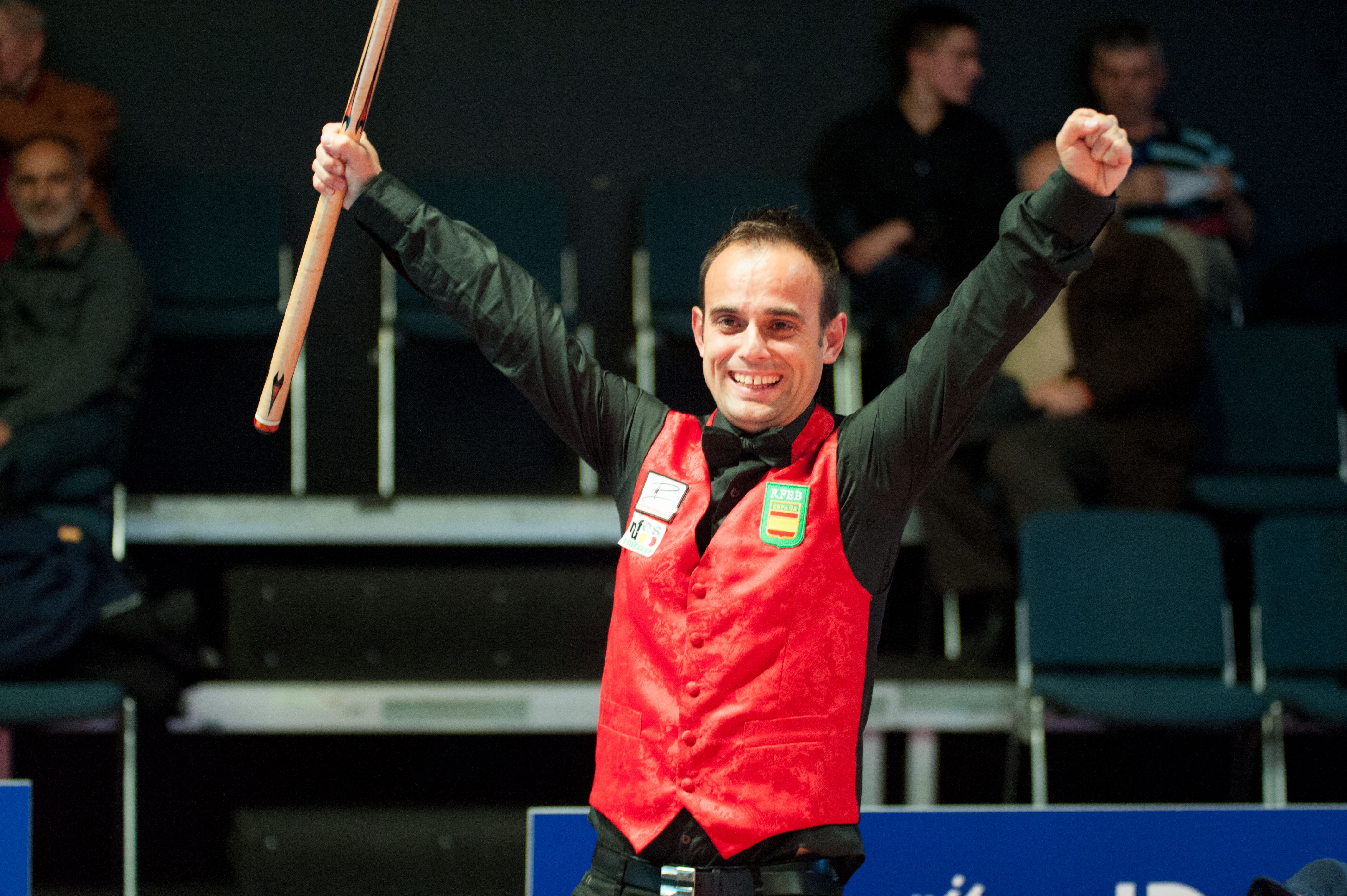 What a great final in the Cadre 71/2-event between Raul Cuenca (Spain) and Dave Christiani from the Netherlands! The Dutch opened the match with a run of just eight balls as Cuenca came to the table for the first time. And for the last time…, because he ran the necessary 200 balls in one inning. As both had equal innings Christiani had no chance for a comeback anymore. So the Dutch had to be satisfied with the silver medal again. Two years ago the same happened to him as he fell short to his fellow countryman Raymund Swertz. The bronze medals go to the Austrian Arnim Kahofer, who made a real marathon of disciplines in the last nine days, and to Esteve Mata who lost in the semifinal against his spanish colleague and later winner Raul Cuenca. Meanwhile Serdar Gümüs from Turkey is on a good way to defend his title in the discipline Artistique. As he was seeded for the last 16 he entered the event this early morning. After beating Benoit Clement (France) everybody expected the German Thomas Ahrens as next opponent but he surprisingly lost to Sergio Sanchez (Spain) in the first round. Afterwards Serdar Gümüs had no problems with Sergio Sanchez so he booked his place in the semifinal on late Saturday evening. His opponent will be Jean Reverchon (France), while Walter Bax (Belgium) will face Jop de Jong from the Netherlands. So a revenge of the final of 2015 between title holder Gümüs and Bax is still possible. The 5-Pins individual event for players under 21 years of age is in hand of the Italian and German players. Max Gabel who already won the bronze medal with the German team played against his fellow countryman Michel Peters while Andrea Ragonesi faced Giovanni Foti in the semifinals. Gabel won his match with 3:1-set and Ragonesi left no doubt about his skills against Foti. Now the winners will meet in the final on Sunday. Last not least the club-team-event is still underway but the final 8 are fixed. Titel holders are the Turks from Mecidiyeköy. Birol Uymaz who was in the winning team two years ago and his partner Ahemt Bayatli will face the Dutch from Apeldoorn in the quarters. Eddy Merckx from Belgium is playing for this club so you can say that this will be a tough team to beat. Nevertheless BC De Goeie Queue from Belgium might be the biggest favorites. Frédéric Caudron and Jean-Paul de Bruijn are the most famous duo in the tournament. Very good chances for at least a medal will have the players from Andernos (France). Roland Forthomme and Thibaut Espada are the favorites against the team from Havirov/Czech Republic. All photos and reports:
http://www.germantour.net/karambol_em_brandenburg_2017_media_tool.asp?id=49 Livestream: www.kozoom.com
Results: http://competition.kozoom.com/en/home/3637/chain/2/