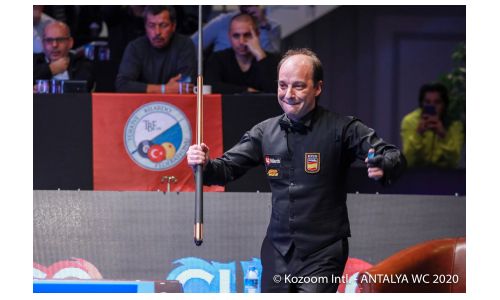 As strong as the Vietnamese, Korean and Turkish players have become, the golden generation of Western-European 3-cushion stars will not give up. Two of the best were in the final of the Antalya World Cup. The opening event of the 2020 cycle had three Vietnamese players in the last eight, but a Spaniard ran off with first prize.

Antalya was his home for two weeks. Not only did Dani Sánchez win the CEB European team title, with his compadre Ruben Legazpi, he also won the UMB World Cup in the same city. After two lesser seasons and a little drop on the world ranking, the short but great Spaniard is back at the summit of international 3-cushion. His win in Turkey raises him back to sixth place.

A new format made its debut in Turkey: 50 points in the K.O. stage, with a 30 second shot clock and automatic time-outs, no equalizing inning. Especially the 30 second clock took some getting used to for some players, but the spectators were mostly enthusiastic. A series of group matches, 16th final and quarterfinal culminated in a final day with four players left standing.

Dani Sánchez had a tough opponent in Haeng Jik Kim, who has a talent for surviving and winning. Their match started nervy and positions were difficult for both players. In the second half, both scored with more confidence and fluency. Sánchez just edged Kim to the finish line: 50-48. The Spaniard had started, and Haeng Jik became the first “victim” of the no-equalizer system: he could do nothing but shake hands.

Jaspers was the player who had made the strongest impression throughout the event: he had already recorded a 40 in 13, a 50 in 15 and a 50 in 13 when he took on Murat Naci Coklu. The Turk had been mostly under the radar, but he can win World Cups, as he’s proven. The semi was one-way traffic though: Jaspers dominated from start to finish and ended it 50-23 in 19.

In the decider on Sunday afternoon, the seventh World Cup final between these two players, Jaspers took an early lead but Sánchez quickly caught up. From 32-31, it was visible that Jaspers did not have his usual cool. Sánchez took full advantage, and ran 10 when he was on 39. The one extra inning that Jaspers was granted didn’t help: 50-35 in 28. Dani Sánchez Galvez was understandably emotional, as he celebrated his return to the top of the world.