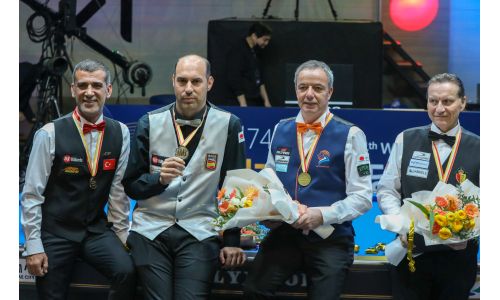 In Donghae City (South Korea) Tayfun Tasdemir won the Gold medal for Turkey in the 74th UMB World Championship 3-Cushion.
The podium was an all-European one: Ruben Legazpi from Spain was defeated in the final and got the Silver medal. Bronze medals were awarded to Eddy Merckx (Belgium) and Dick Jaspers (Netherlands) who was the defending champion and who remains the leader of the world ranking.
Tayfun, thanks to this victory, is now third in the ranking.
A big success for European players even in the quarter finals where 7 out of 8 players are representatives of CEB federations.
Find all results on UMB website.