THE DUKE CHALLENGE: DICK JASPERS IS THE WINNER! 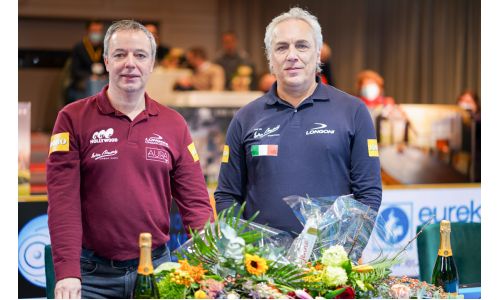 After a long period of forced stop, finally a fantastic tournament has caught the attention of 3-cushion lovers.
The Duke Challenge was an outstanding success for the organizers (KNBB & BEN) and for the main sponsor (JUMBO).

More than 200.000 live viewers on the Dutch sport channel Ziggo and ten thousands of viewers on Facebook.
Participants were put in a "bubble" to avoid any health risk, no chance to go outside, food was served in their room, PCR tests on arrival and no spectators. The same has been the case for staff, referees, and cameramen.

The format was fast and furious: 16 players, direct elimination, sets to 10 points, best of 5. Any minimal error could cost a lot. The tension has been very high during the competition but full of exciting moments.
In the final eights, the ones eliminated were: Montes, Van Erp, Jorissen, Sayginer, Marechal, de Kok, Bury and Forthomme.
In the quarter finals, the ones eliminated were: Horn, Ceulemans P., Merckx, and Coklu.
In semi-finals, Zanetti eliminated Tasdemir and Jaspers got the better of Blomdahl.

The finals between number 1 and number 2 of the current UMB World Rankings, Dick Jaspers and Marco Zanetti, finished 3-1 for a final win to the Dutchman who performed at his best with an average of 2.780 (the best of all the tournament) and high run of 10. Runs of 10 were also achieved by Tasdemir, Bury and Sayginer.

All matches are live streamed by www.kozoom.com