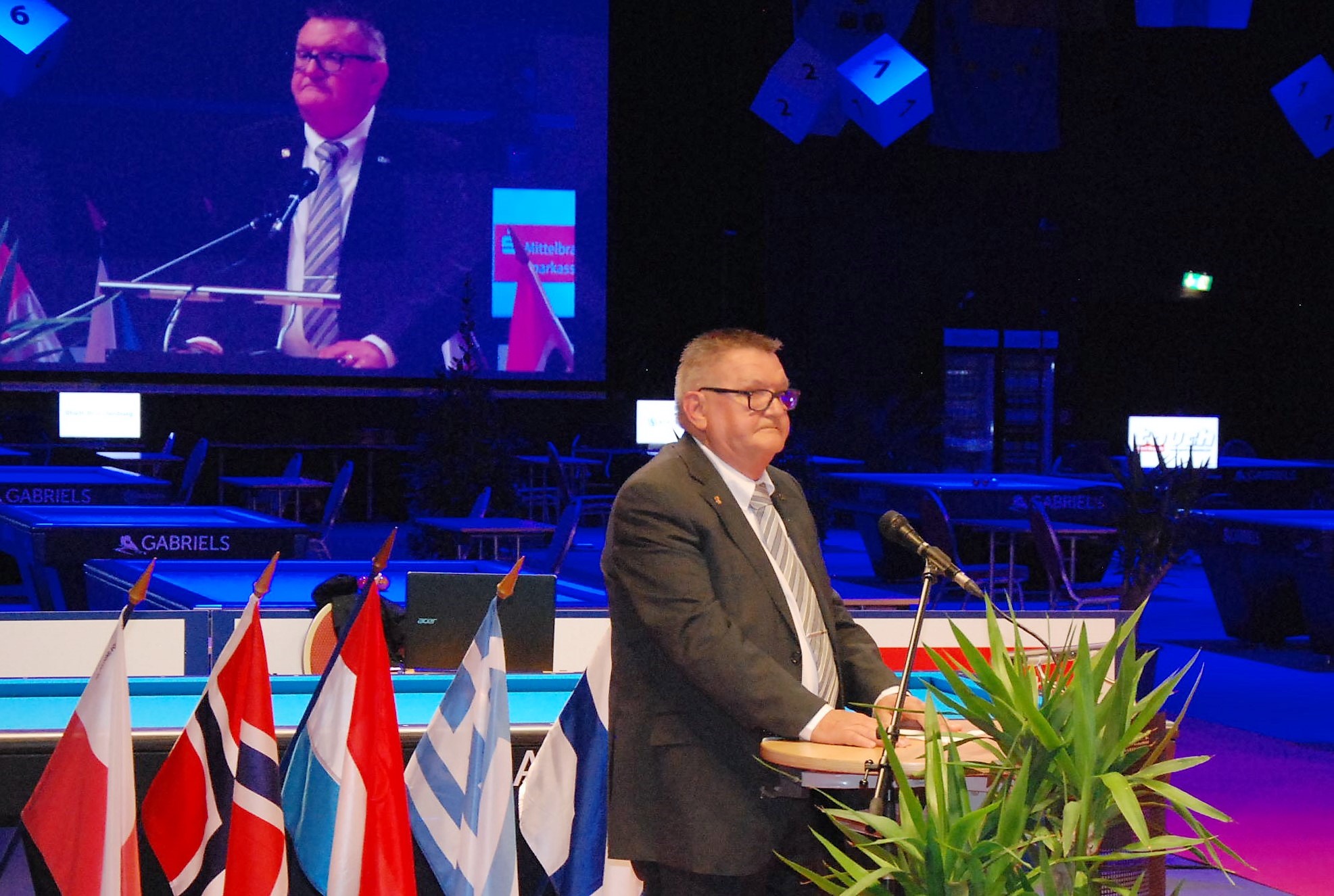 The European Billiards Championships have officially opened. Earlier today the president of the European Federation CEB, Mr. Bennie Degens from the Netherlands, spoke the opening words and welcomed all players, referees, coaches and fans. The opening ceremony was accompanied by various musicians and artists. With the spectator‘s eyes mostly on the 3-Cushion-Event, the 32 players that were left this morning are now down to only four. Frédéric Caudron (Belgium), Dick Jaspers (Netherlands) and Italy’s European Champion of 2013, Marco Zanetti, as expected, have all reached the semis. The biggest surprise of the tournament so far is without a doubt David Martinez from Spain. Currently ranked number 127 in the world, today he showed his European opponents his real skills. Martinez beat Roland Forthomme (Belgium), Tonny Carlsen (Danmark) and Adnan Yüksel from Turkey to reach the final four. The semifinal and the final will be played on Sunday. It will be one of the highlights of the whole tournament. The winner will receive 6,000 Euros. In the 3-Cushion Tournament for players under 21 years of age the participants of the final have been determined. Carlos Anguita from Spain will face Adrien Tachoire (France) in Sunday afternoon’s final. Tobias Bouerdick (Germany) and Mario Mercader (Spain) lost their semifinals and finished third, both will receive the bronze medal at tomorrow’s awards ceremony. Tom Löwe from Germany was surprisingly eliminated by Mario Mercader in the quarterfinals. After his results from the group stage Löwe was mentioned mostly as the gold medal favorite. Meanwhile seven players under 17 completed the group stages of the Libre-Tournament. The qualifiers for the semifinals are Enzo Riquart, Yohann Alderbonn (both from France), Leon Dudnik (Netherlands) and Bryan Eelen from Belgium. Dudnik has only won one of his three group matches but that was good enough to finish second. Jeppe Kjolby (Danmark) and Guillaume Julliat (France) also won one match but both had a lower average than Dudnik. Five teams compete in the U19 Libre Club-Team-Event that began today. They are playing a round robin-system but only the first three matches have been completed so far. The youngsters from Billard Club Oissel (France) and Horna (Netherlands) should be the favorites for the title. You can follow the action live on www.kozoom.com. You can also check out the EC media site http://www.germantour.net/karambol_em_brandenburg_2017_media_tool.asp?id=49. You will find the latest pictures along with reports in three languages. You can download the programme, the time table and much more.
All results: http://competition.kozoom.com/en/home/3637/chain/2/