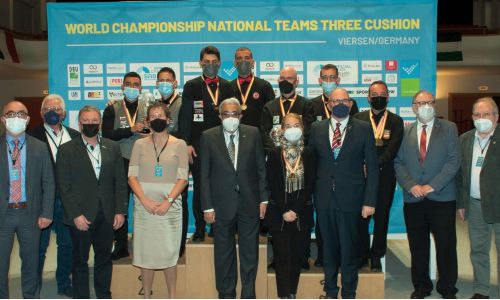 At the World 3-Cushion Team Championships in Viersen/Germany, Turkey successfully defended the title of 2019. The final between the Turks and the big surprise of the weekend, Team Colombia, saw very even games especially in the first half. On both tables, high series were missing.

Only shortly before the obligatory 5-minute break, Can Capak could pull away against Huberney Catano of 23:16. On the TV table, Pedro Gonzalez scored five points in a row for the Colombians to lead 23:17 at the break. Moments later, the action resumed and Can Capak obviously was on a mission. He strung together series after series and ended the match with 40:18 after 17 innings.  So it was clear that Tayfun Tasdemir would need only a draw to successfully defend the world title for the Turks. However, Pedro Gonzalez had something against it and extended his lead to 32:24. Only then Tasdemir stepped up a gear and came close with a series of 6. A little later, he took the lead and had his first matchpoint at 39:35. He missed it, but only one inning later it was time. Tayfun Tasdemir kept his nerve, converted the matchpoint and was immediately in the arms of his teammate Can Capak.

For the Colombians, who were naturally disappointed at first, the silver medal remains, but also the certainty of having offered great 3-cushion sport over the past four days, at the end of which they were deservedly in second place.

In the semifinals this morning Germany had played against Colombia and nobody was able to predict the final result. This was also evident in the two matches. While Martin Horn was in the lead for almost the whole set, Ronny Lindemann had to chase his opponent all the time. Therefore, everything was heading for a draw and the following Scotch Double, but Pedro Gonzalez put a spoke in the wheel.

While Lindemann was down 24:40 against Huberney Catano, Horn was still leading 36:22. However, the tide turned, because at 39:36 Gonzalez made the necessary four points for the overall victory. Horn and Lindemann had no choice but to congratulate their opponents on reaching the final. They themselves had to be satisfied with the bronze medal – still a great result for the host nation.

In the second semifinal, Turkey and Spain initially also looked like a draw. Tayfun Tasdemir played a great match against Daniel Sanchez and won 40:30 after 16 innings. At the same time, Ruben Legazpi was in the lead for Spain for a long time. It was in the 17th inning that Can Capak managed to equalize at 26:26 and then he could distance himself from his opponent. After 23 innings, the last point was scored and the defending champion from Turkey secured a place in the final.