BLOMDAHL AND NILSSON GET THE GOLD FOR SWEDEN IN ANKARA. 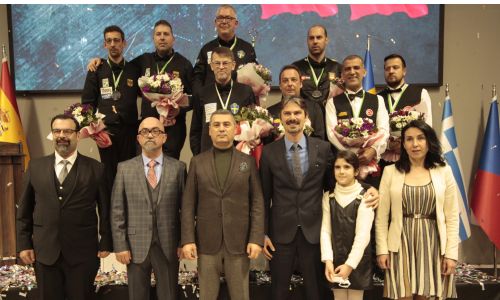 In three out of four quarter finals a scotch double extension was needed to decide the winners after the draws of the regular single matches. Only the Spanish team with Sanchez and Legazpi got a full victory on compatriotes of Spain 2 (Montes & Jimenez). In the scotch double extensions, German team (Lindemann &  Karaca) eliminated one of the favorite teams for the final victory, Belgium (Merckx & P. Ceulemans). Sweden (Blomdahl & Nilsson) had the better of Greece (Polychronopoulos & Kokkoris). And finally in an all-Turkish battle Turkey 1 (Tasdemir & Cenet) won against Turkey 2 (Capak & Orak).

In the first semifinal (Spain vs Germany) Sanchez won easily against Lindemann (40-15 in 19 innings) while Karaca got the better of Legazpi in an hard-fought match (40-35 in 35 innings) making a tie-break scotch double set necessary. This tie-break was an heart-breaking one and Germany finally surprisingly put an end to the hopes of the title holders by winning 15-14 and gaining the first ticket to the final.

In the second semifinal the Swedish team had a clear victory on the Turkish duo with two wins by Blomdahl and Nilsson against Tasdemir (40-33 in 16) and Cenet (40-33 in 26) closing the chances of the home champions to play the final.

The final match saw the revelation team of Germany against a well-known Swedish veteran duo of national teams competitions. Sweden was crowned with gold, thanks to the double victory of Blomdahl and Nilsson for 40-33 and 40-34 against Lindemann and Karaca in 28 and 22 innings.

Spain 1 had the best general average (1,730) and high runs of 15 were made by Eddy Merckx and Tayfun Tasdemir.