SPAIN IS THE NEW EUROPEAN CHAMPION FOR NATIONAL TEAM! 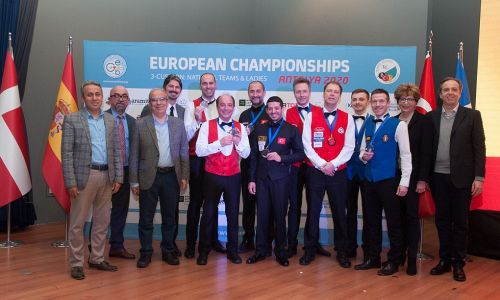 Spain takes the title in the Scotch-Double.

Today's final of the 3-Cushion European Championship for National Teams in Antalya/Turkey was as exciting as a thriller. The hosts with Semih Sayginer and Murat Naci Coklu met Daniel Sanchez and Ruben Legazpi from Spain. The duel between Sayginer and Sanchez turned out to be a great game at the highest level. Already in the second inning Sanchez scored seven for a 9:2-lead, but Sayginer immediately countered with six points. But the Spaniard was completely unimpressed and let follow another eleven points. Sayginer had a lot of time to think during the following five minutes break, but of course he also knew that he hadn't done much wrong in his two attempts. So he continued to play like before and came closer to 20:17 with a great run of nine points.

Whoever thought that the game would calm down now, was mistaken. Daniel Sanchez scored another seven points, which Sayginer immediately managed to answer with also seven points. Only after that, both players took a short break, which was already finished in the eighth inning. Sanchez scored to 38:28 and in the tenth inning he reached the goal. So at 32:40, Sayginer needed eight point to level things up, but he failed after four. Spain was ahead 1:0 and everyone looked to the second match between Ruben Legazpi and Murat Naci Coklu. The two players were more or less on the same level for most of the match, but the Turk, 31:32 down, scored four and another five points to equalize with a 40:33 win.

So the scotch double was needed to crown the new European Champion. The spanish duo clearly dominated the action from the beginning. After four innings they took an 8:3-lead and just a few moments later they delivered their masterpiece with a run of seven point to reach the necessary fifteen points to win the gold medal.

In the first semifinal, Turkey had to deal with the Danes this morning, with Semih Sayginer putting his team ahead by a clear 40:20 after 17 innings. Amongst other things he managed a run of 12 points. The match on table 2 was much more exciting. Murat Naci Coklu was 21:24 down to Jacob Soerensen, but then turned the match around with smaller runs. First he scored five points, later again three and several times two points, so that he could pull away to 36:27. Then Soerensen came back into the match and gave his nation a little hope with a run of five points. But Coklu destroyed this hope immediately and earned his first matchpoint. He missed this one, but in the next inning he made it so Turkey entered the final.

In the second semifinal the first Spanish team played France 1. The match between Daniel Sanchez and Jeremy Bury actually started in the sixth inning. The Spaniard scored nine points in a row and a little later even ten, so that he went into the break with a reassuring 27:13-lead. In the eleventh inning the game seemed to be over, as Sanchez managed another run of six to 34:16, but four innings later Bury was back in business due to a run of eight points. Sanchez was thus challenged again and withstood this pressure. In the 17th inning he scored the still necessary four points to reach the forty points goal. Bury had one further attempt, but only scored four points.

In the second match between Ruben Legazpi and Gwendal Marechal, the Spaniard was always in the lead. Although the Frenchman tried everything, it seemed that Legazpi had always something to add to his score. This did not change when Marechal was able to equalize at 25:25, because Legazpi answered promptly. Over 35:31 he set the score to 39:33 and had his first matchpoint, which he could not take. So he had to play three more times, but this was bearable as the Frenchman could not score either. With the fifth matchpoint, the time had finally come and Ruben Legazpi brought his team into the final with a 40-35 victory.

So we look back on a six-day European Championship, which was perfectly organized from start to finish. The Turkish hospitality was once again outstanding and the athletes, coaches and fans experienced a championship in a very warm and sporty atmosphere. The very well trained referees, who had no problems with the management of the matches, also contributed to the great competitions.

Furthermore, the Limak Atlantis Hotel offered very nice rooms, proximity to the beach and a SPA area for relaxation.

Many thanks to Turkey for hosting a remarkable European Championship, which will be remembered by all participants.