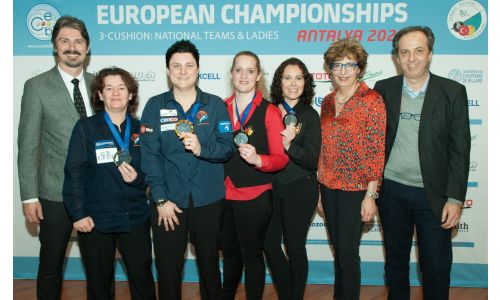 Therese Klompenhouwer is the old and new Women’s 3-Cushion European Champion. At the championships in Antalya, Turkey, the Dutchwoman won the final against her compatriot Karina Jetten with 30:20 after 21 innings.

At the beginning of the final, both players were equal, with Jetten even taking a slight lead of 11:8 after ten innings. Only a few moments later, Klompenhouwer had equalized the result before she started the 13th inning for the tournament's highest run. No fewer than eleven successive caroms came her way and she went into the break with a reassuring 22:12-lead.

After the obligatory break, Jetten worked her way up to 16:24, but was immediately countered by her compatriot, who set the score to 16:28. In the twentieth inning, Klompenhouwer had her first match point, but missed it by a hair's breadth. She did better one shot later and was able to celebrate her new European title.

At the beginning of the semi-final, Klompenhouwer had a hard time against Jaimie Buelens from Belgium. Although she was able to maintain a small advantage, she couldn’t get away. This was only possible after the break, when the Dutchwoman took the lead with 20:13 points after 22 innings. Four shots later she managed a nice run of 5 to 29:15 and only a few moments later Klompenhouwer scored the thirtieth point. Jaimie Buelens was not able to counterattack in her last attempt and therefore finished the European Championships on third place.

The second semi-final between Karina Jetten and Estela Cardoso from Spain was largely similar. The Dutch player gained a small advantage, but Cardoso always came back and even took the lead with 13:11. But Jetten knew the answer immediately and went into the break with a run of 7 points and a total score of 18:13 after 18 innings.
The Dutchwoman came back from this break very well and marked the preliminary decision in the 23rd inning with a run of eight points. At least that's what they thought, because afterwards Jetten had a hard time closing the match. She only managed to make one more point, while Cardoso was getting closer and closer. In the fortieth and last inning, Jetten was ahead 29:23 but Cardoso only managed to score four points instead of the minimum of six.

In her speech during the awards ceremony, CEB-President Diane Wild was delighted with the improved performances in the women's competition and that, unlike last year, another nation had joined the circle of participating countries. At the same time, she announced that the women will have again their own training sessions on a European level this summer.

The European Championships for teams will start tomorrow.

The whole event is livestreamed via www.kozoom.com and Germanys Touch Magazine will be responsible for newsletters and pictures which you will find here.